At the end of the alphabet but tops among the three in AKC registrations, the Yorkie is by far the most popular terrier in the US. In 2005, the breed jumped past the German Shepherd and Beagle to take the number three spot in registrations behind number one Labrador Retriever and number two Golden Retriever. More than 47 thousand Yorkies were registered in 2005, up from the 43.5 thousand registered the previous year.

Many of these Yorkie owners would be astonished to learn that this groomed, pampered breed began life as a working dog as their Scottish masters moved south of the border into England's Yorkshire and Lancashire counties to work in the mines and mills. The Scotsmen brought their Clydesdale and Paisley terriers to their new country; these dogs in turn bred with English terriers to create a 10-to-14-pound, wire-coated dog that was eventually dubbed the Yorkshire Terrier.

The Yorkshire Terrier became popular as a pet and show dog in the mid-19th Century, and downsizing began. Today's Yorkie weighs seven pounds or less, has a long, silky coat that just wouldn't make it on the farm or in the mills or mines, and is a highly favored apartment and lap dog.

The Yorkie has one color pattern: adults are always dark steel blue with tan markings, but puppies are born black and tan and may have some random black hairs before they mature. The blue color covers the body from the back of the neck to the tail; the rich, golden tan markings cover the head, chest, ears, and legs.

The luxurious, silky coat is the breed's most striking feature. Parted along the back, the long straight drags on the floor if not trimmed. The fall on the head is long and is usually tied with one bow in the center of the forehead or parted in the middle and tied with two bows.

The flowing coat and diminutive size lead to misunderstanding: Although the Yorkie does like to be pampered, it is not a wimpy dog. Writing in the online version of Dog and Kennel Magazine, Richard Beauchamp describes several instances of tough Yorkie attitude and constitution and concludes:

"The Yorkshire Terrier's size and doll-like appearance - to say nothing of the dainty ribbons with which it is often adorned - belie its toughness and determination. Toy breed fanciers are wont to boast that their tykes are actually 'big dogs in little dog suits,' but the Yorkie is one dog that can walk the talk."

The Yorkie is long-lived with relatively few serious health problems. It is susceptible to a toy dog structural abnormality known as patellar luxation (dislocated or slipping kneecaps), so puppies should be purchased from breeders who test breeding stock for this problem. Other potential problems include hypothyroidism, portacaval liver shunt, hypoglycemia, allergies, diabetes, progressive retinal atrophy, and tooth and gum weaknesses.

Yorkies also need more daily care than most terriers. Although they don't shed much, the long, silky hair will tangle and mat if not properly brushed. Diet is important; soft foods can exacerbate problems with already weak teeth and gums.

So why are they so popular? Yorkies can be perfect for apartments, for families with children, for individuals or couples without children, and even for families on the go. They fit nicely in backpacks and shoulder bags and can even ride under the seat in special airline-approved carriers. They are bright, perky, fun dogs indoors, are alert watchdogs, and need little outdoor exercise. And for the competition-minded, they can hold their own in obedience and agility events. 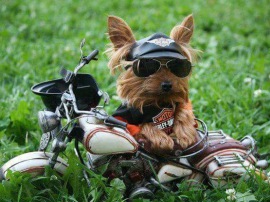 Call for pricing and availability!